The 4 Technological Revolutions that changed everything.

Automation and evolution are terms related to all centuries. It is within the human instinct to develop ourselves and to become more and more productive. This while doing less and less ourselves. As we have seen over the past centuries, innovations were at the root of all technological revolutions causing the emergence of new inventions. But an invention is only as good as its execution and market implementation. Nowadays, most original inventors aren’t known. Contrary, it is their competitor with a better market strategy that wins the hearts of their followers.

Take for example the story of smartphones. The concept of a smartphone, the “Simon Personal Communicator”, was created by IBM in 1992. It had a calendar, address book, and native appointment scheduler. Later, companies like Nokia build their smartphone with new specifications and features like a touch screen, web browser or a camera at both sides. But only Steve Jobs was able to let his customers browse the web on their smartphone as they would on a desktop computer. The technology was already present, but only after the almost perfect market implementation of Steve Jobs, targetting the right audience, the smartphone was able to conquer the world.

Let’s have a look at previous technological revolutions to discover what it can teach us about the future.

A comparison could be made with the First Industrial Revolution  in the 18th century. Despite steam power already existing for a long time, the later use for industrial purposes was one of the greatest breakthroughs for increasing human productivity. Instead of weaving looms powered by muscle, steam-engines could be used for power. The increased use of steam power together with the mechanisation of production characterized the First Industrial Revolution. The mechanised version of a simple spinning wheel was able to produce eight times the volume within the same timeframe of manual production. Other high impact innovations like faster transportation resulted in more knowledge creation. Furthermore expanded it the product market, more specifically the steamship and steam-powered trains, were also used. This all was made possible due to the right implementation of steam-power.

Due to increased steam power, less manpower was needed in farming causing more people to exchange farmland for industrial towns. This opened opportunities for new inventions or implementations of existing techniques due to the decreased share of humanity that had to work for our food. The Second Industrial Revolution was characterized by both the discovery of electricity and the assembly line production. Henry Ford was able to realize mass production due to the increased number of citizens coming from the agriculture industry. After what he had seen at a slaughterhouse in Chicago in the 19th century. He came up with the concept of mass production by humans modelled. Ford carried over these principles into automobile production. It drastically disrupted the process resulting in a significantly faster production speed at a lower cost. 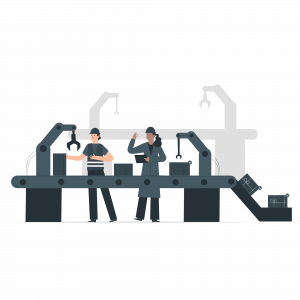 Over the years, the cost of human labour had increased so much that companies were forced to invent new ways of decreasing production costs. This led to the Third Industrial Revolution in the 1970s through partial automation using memory-programmable controls and computers. Since the launch of these new technologies, we are now able to automate an entire production process without any human assistance.

The decrease in demand for industrial workers resulted in a shift from production-oriented companies to service-oriented ones. We are currently living in the Fourth Industrial Revolution marked by the application of information and communication technologies. It builds on the developments of the Third Industrial Revolution. Production systems that already have computer technology have been extended with a network connection and have a digital twin on the Internet so to speak. These allow communication with other facilities and the output of information about themselves. This is the next step in production automation. The networking of all systems leads to “cyber-physical production systems”. Therefore smart factories were founded, in which production systems, components and people communicate through networks causing production to become nearly autonomous. The automation of things is not only essential within the production industry but it’s also vital in the services industry where we can still automate many processes

That is where we and RPA come in place.

Robotic Process Automation has been around for a while. The possibilities are almost limitless, and opportunities are plentiful. But it is the implementation RPA which is key in its success. A robot is programmed to do a given task that was previously done by humans. Imagine a task that you need to execute frequently on a computer like accounting tasks, copy-and-paste work, generating reports, processing data between different software. RPA can automate them while avoiding costly mistakes and freeing up time. During the Third Industrial Revolution, industrial processes were automated resulting in a shift to the service industry. Now RPA can automate manual, repetitive tasks enabling employees to focus on more valuable and challenging work, allowing even more innovative solutions to emerge. With RPA you will reduce employee stress and costly mistakes; increase their morale and productivity; save huge amounts of costs and time.

You probably realize by now that you need to get started with automation in order to be ready for the Fifth Technological Revolution and to stay one step ahead of your competitors, but how? There are many great companies out there that can help you. While everything will work fine technically, some tend to overlook a few key components of successful automation. The human aspect and the right implementation are vital. We at Ad Astra Industries develop our own state of the art RPA software such that it allows a tailor-made implementation. We combine that with behavioural psychology insights to introduce our robots into your organization. This way we can help you get started on your automation journey.

Feel free to contact us for a no-obligation conversation, we look forward to exploring the possibilities with you.